Simply if you look up on RigpaWiki the word guruyoga you will see that it is important to invest our love to an inner (or outer) huru – which is the Presence according to E. Tolle.

So here you see that it is good to use a reminder each hour to meditate on the guru:
https://lifehacker.com/increase-your-mindfulness-at-work-with-hourly-check-ins-5990338

The only thing we did not have is a List of the Gurus or Jesus-avatars or Tzadiks (Messiah-avatar Rabbis) – sometimes they are Kings or Art Heroes.

I found such a list in a manuscript of Freud’s London friend, the UNESCO Founder Karl MAnnheim (look him up in a wikipedia) because he was a great Uncle of mine.

In Europe it is difficult to remember the Sanskrit names – hence some Tibeti masters (like Sogjal rinpoche) claim that we can use our own heroes and masters – including Jesus.)

He went through History (between 1500- till the 1800s) and in each decade he found an Invention and a Ruling King (considered a Jesus avatar) who has had a Jewish Doctor or RAbbi friend (also considered a DAvidic descent hence Messianic avatar – simply: European Gurus or Boddhisattwahs).

So the list shows historical Kings (and RAbbis) with Biblical legends. (Due to the melodies of the Bible that change weekly in each instance one can find the corresponding Bible legend to a hiorical date – an invention, a massacre or a crwoning or a birth date.)

I just explain it: we have weekly changing melodies when we sing the Bible Weekly Portion (Noah this week). My great grandfather, a rabbi in Hungary sought the weekly melody in famous Operas – and so he could see which King  did sing the very same melody on that week as was sung by Bible singers – and imagined the King /a Pharaon Avatar from a Davidic Kingly ancestry/  talking about a newborn leader’s horoscope that week. So each week we have a weekly histroscope- which is a psychological character draft corresponding to the Big10+2 in psychometry, and hence we are able to deal with one character trait (or defect) of us each week in this mythic context of Bible and Opera and Horoscope archetypes.

This is the year of assassinations against Leningrad/Petersburg Mayor Kirov (ordered by Stalin) and against Alexander I. of Serbia/Yugoslavia ordered by Hitler in Marseilles./

KING: The contemporary King /Pharaon avatar/ was George V. of England. (1865-1936) The Kings in this List are all related to Davidic descendants  among their ancestors.  (Bourbons, Brandenburgers, Medicis, Gonzagas, Windsors, Romanovs all having ancestors both in Aragon and in Hungary from Davidic lines.) So they always had Messianic hopes and fantasies – hence interested in horoscopes.

HOROSCOPE OF ANCESTRAL KING: The birth about which the Rabbi was asked by the King in his family was that of  Albert II, King of Belgium (born on the 6th June of 1934 – abdicated in 2013).

(Photo: Eric Draper) (King Albert with the President of the US and wifes, 2005)

SIGN OF THE WEEK: So he is a Gemini. Which belongs to  Openness among the Big10 +2 (Flexibility and stability levels)

PSYCHOMETRIC TRAIT:  Openness to experience: (inventive/curious vs. consistent/cautious). Appreciation for art, emotion, adventure, unusual ideas, curiosity, and variety of experience. Openness reflects the degree of intellectual curiosity, creativity and a preference for novelty and variety a person has. It is also described as the extent to which a person is imaginative or independent and depicts a personal preference for a variety of activities over a strict routine.

Individuals with high openness are said to pursue self-actualization specifically by seeking out intense, euphoric experiences. Conversely, those with low openness seek to gain fulfillment through perseverance and are characterized as pragmatic and data-driven—sometimes even perceived to be dogmatic and closed-minded. Some disagreement remains about how to interpret and contextualize the openness factor.

Leo and Virgo (appearing due to the Torah Portion Vezot Habracha mentioning the Tribes. Issachar and Zevulun)

and the domineering personality of Leo will eventually annoy this reserved but deep thinking partner,  Virgo, who really doesn’t like to say no to people. Your partners resentment will build up, until one day they crack.

(Interestingly there was a Virgo-Leo coincidence on 23 September, the Second day of New Year, when we started this Portion, and on the net some sites claimed it happens every 7000 years, so there appeared wild prophecies…and nothing really happened.) 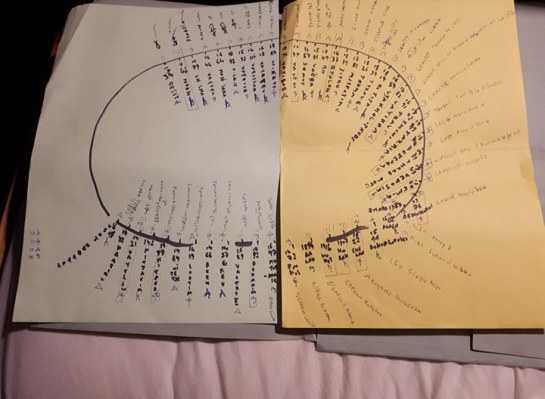 (Called this way due to my first ancestor in the 1700s)

The Pharaon of the Generation. Sigismond of Luxemburg

The Rabbi (Mashiah /”Christos”) of he Age: Rabbi Albo

Hence we must see the conjunction: Taurus and the monthly Libra.

Libra’s easy superficial behaviours are irritating for the Taurus.